Christmas in the Magic Kingdom 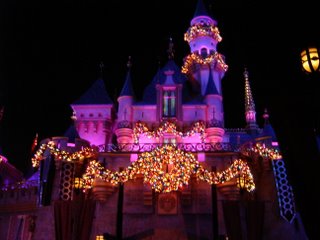 As a year-end gift, Disney opens Disneyland two nights in December exclusively for employees and their immediate families. It’s cold and dark, but the park is magnificent, all dressed-up for the holidays; plus the lines to the good rides are practically nonexistent.

We don’t go every year; but this time was a must because we hadn’t yet seen the renovated Pirates of the Caribbean ride. As the entire world knows by now, the Pirates movies have become one of the biggest of the company’s many franchises. And so, to take advantage of Pirates-mania — timed, not so coincidentally, to correspond with the release of the second Pirates film, “Dead Man’s Chest,” this past summer — Disney decided to “update” the ride on which the movies are based. Not only do animatronic versions of the movies’ characters now appear in the ride, but everything has been freshened up.

Over the past forty years, I’ve probably ridden Pirates of the Caribbean some thirty times, so the thrill had pretty well gone for both Tim and me. This time was definitely different, however. Fifteen minutes after the park opened, we were anxiously on our way to the Caribbean. 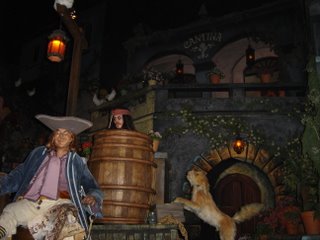 The ride’s storyline is still very much the same, except now the enemy ship is led by Captain Barbosa (a very good likeness of Geoffrey Rush), who is searching for his nemesis Captain Jack Sparrow (Johnny Depp). (Beware: spoilers ahead!) Captain Jack, who looks exactly like his real-life counterpart, can be seen hiding amongst some mannequins and then again inside a barrel, and finally surrounded by riches, singing “Yo-ho, yo-ho, a pirate’s life for me!” The newly restored treasures sparkle and the villagers and their captors all look freshly scrubbed. There is also a wonderful water curtain, where a projection of the squid-headed Davy Jones warns all riders to turn back. I was so distracted taking pictures the first time around, I made Tim go on it with me again so I could savor every new feature. If it wasn’t so darn late when we got home, I probably would have watched both movies, too, just to relive it all again. 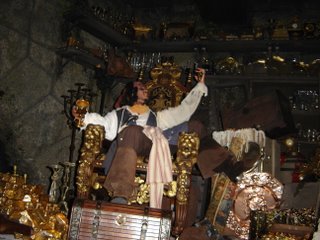 As for the rest of Disneyland, it looked beautiful as always. It’s a Small World was festooned in Christmas lights and Sleeping Beauty’s castle was glorious. Although I thought we’d only want to go on the Pirates ride, we also (of course!) rode my other favorites: the Haunted House, decorated once again as “The Nightmare Before Christmas,” the mad teacups, Peter Pan, and Buzz Lightyear’s Astro Blasters, a combination ride and video arcade. Before we knew it, it was 11PM — way past our bedtime! — and so we caught the tram back to reality . . . but not before picking up our limited-edition, employees-only holiday ornament. Another Disney memento to add to our already memory-laden Christmas tree. 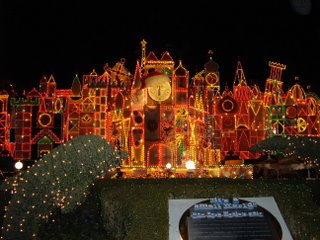