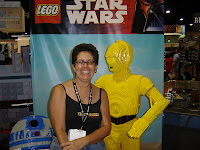 Comic-Con hit San Diego again with a big "BANG! POW!" last weekend. What started 38 years ago as a rather casual annual gathering of local comicbook collectors has turned into a mega-million-dollar extravaganza that attracts some 130,000 fans and media hounds from around the world. According to the LA Times, Comic-Con has become a “pop-culture” phenomenon.

Since getting into the con on Saturday was such a nightmare last year, Tim and I decided to go on Friday instead. Activities began at 10:30AM, so we reserved seats on the 7:20AM train heading south. We arrived at L.A.’s magnificent Union Station at 6:40AM.

“What do you think the geek factor will be on the train?” Tim asked before we even got to the station.

And sure enough, the train was overrun with young fan-boys and -girls wearing dark t-shirts sporting the logos of various rock bands and science fiction movies. Clothes—and, of course, costumes!—are a big part of the Comic-Con experience.

The train arrived in downtown San Diego at 10:10AM. From there, it’s a 15-minute walk to the Convention Center—just enough time to make the first big panel presentation of the day at 10:30AM. Warner Bros. studio was sneak-previewing its upcoming movies, including “Get Smart,” the remake of one my favorite 1960s TV shows. Although the movie’s main star, Steve Carell (who plays secret agent Maxwell Smart), wasn’t listed in the program, Tim and I were betting he would indeed show-up since Comic-Con has become the biggest movie-hype fest on the west coast. We raced off the train. 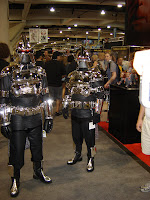 Thank goodness for advance online registration because we were able to run right in and get our convention badges. The line outside the Warner Bros. event, however, was daunting. Even though the auditorium (the infamous “Hall H”) holds 6,500 people, the room was already at capacity, so we gave up and headed over to the exhibits. Boy, was I grumpy the next morning when I read that not only did we miss Carell, but The Rock (who plays super Agent 23) was also there. 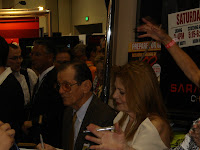 The exhibits were a rush, as usual. Some of the creative geniuses behind the sci-fi classic “Blade Runner,” including actresses Sean Young and Joanna Cassidy, were there signing posters for the 25th anniversary DVD of the movie. 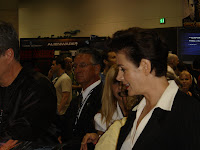 At the Disney exhibit, we stood on line to see an enclosed display of costumes and photographs from the most recent installment of “Pirates of the Caribbean.”

The most impressive exhibit, though, had to be LucasFilms, which showed clips of the various “Star Wars” movies on three screens that could be seen from just about anywhere in the hall. At one point, everyone in the immediate vicinity looked upward as Luke Skywalker proceeded to use The Force to destroy the impenetrable Death Star. As a group, we’d probably all watched that scene over a thousand times total—still, there’s nothing quite like seeing “Star Wars” again on a big screen. 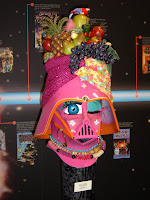 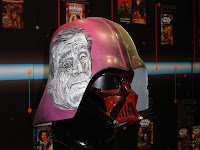 LucasFilms also provided a mini-exhibit of “Vader Project” artworks from the “Star Wars” convention back in May. Our favorites were “Carmen Mirandarth,” made up to look like Carmen Miranda, and political satirist Robbie Conal’s tribute to the Dark Lord (Dick Cheney) and his minion (George W. Bush). 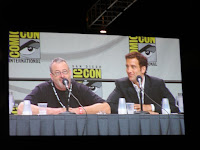 After walking around and gawking at exhibits for about three hours, I insisted on sitting down. So we made our way back to Hall H, where clips from the upcoming movie “Shoot ‘Em Up,” starring Clive Owen, were about to be shown. Now I’ve loved Clive Owen since he played the title character in Disney’s movie “King Arthur,” so I was absolutely thrilled when he and director Michael Davis came out to talk about their new movie and answer questions. Owen, who usually plays a rather stoic leading man, was funny and very cute. The audience—all 6,500 of us!—adored him and the film.

On that high note, Tim and I left the con and headed into San Diego’s Gaslamp district to get something to eat. The geek factor was huge there, too, but we didn’t care because we were officially geeks now ourselves. After gobbling down a couple of tasty pizzas, we made our way over to the train station, where we boarded the Amtrak back to reality. Only 360 days left till next year’s Comic-Con . . . 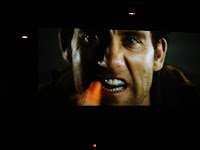