Despite reserving my hotel room a year ago and buying my four-day pass back in February, it looked like I was going to miss last weekend’s Comic-Con due to work and family obligations. But just as the sky is always darkest before dawn, late Friday I decided I couldn’t stand it and, like a junky, declared I had to go to Comic-Con! Though Tim didn’t have a ticket, he came along, too, lured by the promise of eating only at restaurants sanctioned by Guy Fieri. We were on the road south by 7:00 the next morning. 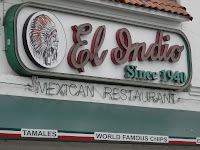 Our first stop was El Indio, one of Diners, Drive-Ins and Dives’ best San Diego eateries and our personal favorite Mexican restaurant. I had a plate full of taquitos for breakfast—YUM!

Tim then dropped me off at the convention center. The Con was strangely quiet at 9:30AM. In fact, for a moment I actually forgot it was sold-out (125,000 tickets!) and thought the recession had finally conquered geekdom. But reality set in as soon as I ran into a nest of Predators and the fun began. I wasn’t in the mood to stand on long lines to see panels about True Blood or Lost, so focused my energies on the massive exhibit hall instead. The big themes this year: TV remakes (new versions of The Prisoner and the cheesy 1980s series V), sequels (Iron Man, Twilight), 3-D (Avatar, Alice in Wonderland, Tron), and anything having to do with vampires.

I had missed Johnny Depp, who made a surprise appearance on Thursday (boo hoo!), so was on the lookout for whatever celebrities I could see. Nichelle Nichols, Uhura of the original Star Trek, was there (as usual), selling autographs for $20; but this was not nearly as scandalous as Mark Hamill (aka Luke Skywalker), who was selling his signature for $100 (the nerve of some former science fiction icons!). I also saw Edward James Olmos and James Callis from my beloved Battlestar Galactica, plus the entire cast of the TV show Chuck (the boys were all sporting summer beards).

I was bopping around quite satisfied with myself, when suddenly everything ground to a halt. It was a complete human gridlock. I was grumbling, until someone announced that Jon Favreau, director of Iron Man 1 & 2, was standing atop the two-story G4 (TV’s gaming channel) booth! Everybody burst into spontaneous cheering. I called Karen.

“Quick, turn on G4!” I yelled. “I’m in the background screaming and waving at Jon Favreau!”

“Where are you?” she answered, not knowing I had decided to go to Comic-Con after all. Not surprisingly, she couldn’t see me through the hordes. 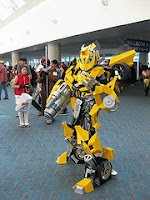 As always, the attendees’ costumes were a highlight of the day. My favorites: (1) an amazing yellow Bumblebee from the Transformers movies and (2) Darth Vader in a smoking jacket, which made me laugh out loud. Women seemed to be more voluptuous than ever—some wearing hardly anything at all—while fans of all ages continued to dress like the Joker, in all his incarnations, Batman, Klingons, and various Star Wars characters.

Meanwhile, back in the real world, Tim had gone to the movies. We reconnected after 2PM and headed over to our hotel. As promised, we ate dinner at Luigi’s, a small pizza joint that Guy Fieri loves. To say we were disappointed would be a huge understatement, especially since we’ve had much better pizza at our own LaRocco’s in downtown Culver City. In keeping with the theme of the weekend, we then went to see the latest Harry Potter film at Horton Plaza. Back at the hotel, we could see fireworks exploding above Sea World. It was a perfect evening.

I was tempted to return to the Con Sunday morning, but had breakfast with Tim instead at the Studio Diner, yet another of Guy Fieri’s recommendations. Located next to San Diego’s only fully functioning film studio, the restaurant is decorated in kitsch movie memorabilia; but again, the food was nothing spectacular. Could Guy actually be losing his touch?

We hopped in the car and headed back to L.A., but not before stopping once more at El Indio for some last minute taquitos. YUM!
Posted by Cyn at 11:34 AM