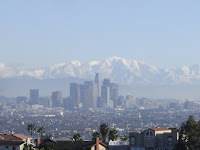 What would you do if an out-of-town friend said she wanted to experience L.A. through your eyes and had only 24 hours to do so? Well, this is the exact challenge posed by my colleague Suzanne, who was in town (from Sacramento) on Friday for a workshop and not flying out till Saturday night. After much excited deliberation, Tim and I pulled together the following itinerary:

1. Dinner Friday night - Border Grill is the westside’s self-designated “urban cantina” created by celebrity chefs Mary Sue Milliken and Susan Feniger, the Food Network’s “Too Hot Tamales.” Although Los Angeles is in the midst of its two-week DineLA festivities--where restaurants around town serve price-fixe meals at a reduced cost--we all decided to order off the menu--pork (no big surprise there!)--and had a fabulous dinner. Welcome to L.A.! 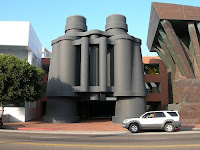 2. Main St., Venice, CA - Suzanne was staying in Santa Monica, so we picked her up Saturday morning and drove back to Culver City via Main St. in Venice. Two blocks away from the zaniness of Venice beach, Main St. is home to upscale shops and restaurants (Wolfgang Puck’s Chinois--yum!) as well as unusual architecture: the 10-ft. clown ballerina and Frank Gehry’s binocular building. We then cut over to Venice Blvd. via Abbott-Kinney (more upscale shops and restaurants), all the while regaling Suzanne with tales of the old Venice pier and the long-gone “red car” inner-city railroads.

3. Downtown Culver City - after a quick tour of our house and gardens, we zipped through the trendy part of Culver City and waved at Culver Studios, where exterior shots of Tara, in Gone with the Wind, were supposedly filmed. We wanted to go up to Kenneth Hahn Park to showoff the L.A. basin in its snowcapped glory, but the view was obscured by clouds and so we zoomed on to our next destination instead. (The photo at the top of this entry was taken on a clear day two weeks ago after the rains.) 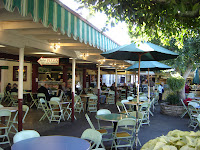 4. Farmers Market - As I’ve said elsewhere on this blog, the Original Farmers Market is one of my favorite places in L.A. Established in 1934, the market is a diverse conglomeration of food booths, tourist traps, and fruit stands, all with their own charm and stories to tell. Next to the Market is The Grove, an open-air, pedestrian-friendly mall that caters to the Beverly Hills set. We were worried when naysayers predicted the opulent Grove would diminish the more traditional Market. But just like everything else in the city, Old-school has managed to live in harmony with the New, making Farmers Market the single most quintessential symbol of Los Angeles.

5. Youngwood Court - No tour of L.A. is complete without a quick peek at Youngwood Court--or as we like to call it, the House of Davids--on 3rd St. and Muirfield in prestigious Hancock Park. The house boasts not one but seventeen (!!) copies of Michelangelo’s David, all of which are dressed in red velvet jackets and hats during the holidays. We feel bad for the neighbors, but can’t help stopping by periodically to see what new statues have been added. And, of course, out-of-town guests are always amused!

6. Hollywood sign - Suzanne had never seen the world-famous sign, so we headed up Vine St. toward Hollywood. On a clear day you can actually see the Hollywood sign (barely!) from the end of our block. But the very best view is from Lake Hollywood, the reservoir built above L.A. by William Mullholland in the early 1920s. As a kid, I'd never heard of the lake even though it’s a mere handful of miles from where I grew-up in Burbank. Tim and I discovered it when we moved back here in the 1990s and frequently walked around its perimeter when we lived in the mid-city. The dam is a marvel that’s completely invisible to the naked eyes of those wandering around Hollywood. Still, the main reason to visit is the up-close-and-personal view it affords of the ever iconic Hollywood sign. Click here for directions.

7. Driving home - We decided to take the long way home and so drove along Ventura Blvd. to give Suzanne a taste of the nicer parts of The Valley. We then shot up Beverly Glen so she could see the famous “stilt houses” perched precariously above the canyon. Suzanne had already seen Sunset Blvd. and UCLA, so I pointed the car south to Culver City. She was back at the airport by 6PM. Her tourguides were asleep in front of the TV by 9:30PM!
Posted by Cyn at 7:43 PM

You hit a lot of my favorite spots. Next time: Union Station, Griffith Observatory, and the LA Central Library.

And, of course, the ESPN radio studios!