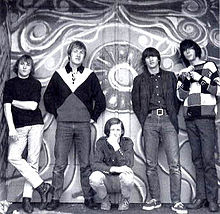 Summer officially started for us Sunday night as we stood outside the Wiltern theater, waiting to see the recently reunited band, Buffalo Springfield. Sure, we had seen Paul Simon perform in an amazing concert just a few weeks before; but Sunday night’s audience was truly a summertime Woodstock crowd in jeans and vintage rock t-shirts. This was the first time Buffalo Springfield was going to perform in L.A.—the group’s hometown during the 1960s—in over 40 years.

Our tickets said the show started at 7PM, so we arrived by 6:15PM. Walking from our secret parking spot two blocks away, we passed the band’s tour buses tucked behind the theater. A handful of fans stood outside the barricades, clutching albums and posters they obviously hoped would be autographed. We walked around to the front of the theater and joined a short line. Two men panhandled us, while a woman hawked peace symbol stickers, supposedly to raise money for hungry families. We eavesdropped on the couple behind us as they related what just happened to them at dinner.

“We mentioned to the young waitress that we were on our way to a concert,” the husband said.

“Who are you going to see?!” the waitress asked excitedly.

“Buffalo Springfield—how great!” the young woman responded. “Isn’t that the guy who also starred on a soap opera several years ago?”

“I think you’re thinking of Rick Springfield,” the wife told her, stifling a laugh.

The theater doors opened at 6:30PM as we all headed into the lobby. The concert was sold-out. A guy, who had bragged that he was going to sell his ticket for twice what he paid for it, yelled to a group of passersby, “Last chance to see Buffalo Springfield!” while waving his ticket. No one bit, so he entered the theater with the rest of us. 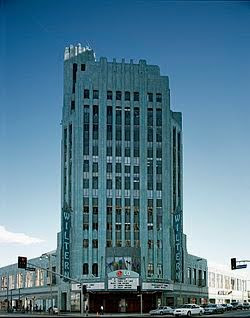 Built in 1931, the Wiltern is an art deco masterpiece clad in blue and bronze terra-cotta. The interior is equally beautiful, with hand-painted murals on the walls and ceiling. Renovated many years ago, the Wiltern remains one of L.A.’s most magnificent theaters. Its sound quality is outstanding, too, as we eventually found out.

We were in the relatively cheap seats and so headed upstairs. The doors to the mezzanine didn’t open till 7PM, so we had plenty of time to gaze at our fellow audience members. Most of the people were our age, looking ready to spend the evening reliving their youth. Some had seriously outgrown their tie-dye t-shirts (yikes!), but overall our generation has aged fairly well.

The opening act—folksingers Gillian Welch and David Rawlings—were terrific, but they didn’t start till 8PM—meaning, of course, that Buffalo Springfield wasn’t going to take the stage until well after 9PM. Now, we had waited 8 hours—in the rain, no less—when we saw them at the Bridge School concert in northern California last October, so I can bide my time with the best of them. But come on! The tickets said 7PM!

Still, all was immediately forgiven the minute Stephen Stills, Richie Furay and rock legend Neil Young began to play. The three surviving bandmates (two others had died several years ago) took turns singing the lead on their greatest hits, while the crowd went wild. At one point, Neil introduced the band as “Buffalo Springfield—we’re from the past!” They obviously had a blast playing together again and had clearly practiced many times since we saw them in October.

Before they came out, the woman sitting in front of us kept asking whether we thought they’d play “For What It’s Worth,” one of the most famous anti-Vietnam War anthems and arguably their best song.

“They’ve just got to play it!” she insisted. “It wouldn’t have been the ‘60s without that song!”

And play it, they did, during their show-end encore. And, yes, it was almost like the ‘60s all over again.

For an excellent review of the concert, click here. 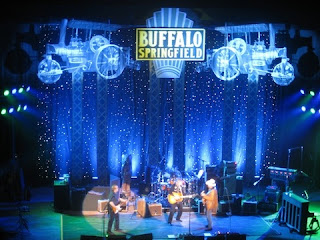