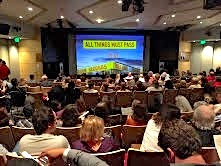 On Wednesday night, Tim and I attended a special screening of the documentary All Things Must Pass at the Grammy Museum. Directed by Colin Hanks, the film chronicles the rise of the mega-record-store-chain, Tower Records, from a small phonograph collection at the back of a Sacramento drugstore, to its sad demise in 2006. A Q&A panel followed afterward with Hanks and store founder Russ Solomon.

As a kid, I bought all my LPs and 45s at local discount stores (does anyone else remember Zodys? ) and a small record shop on Burbank’s “golden mall.” But once I became a young adult, I started shopping at the legendary Tower Records on Sunset Blvd., where I often stopped on my way home from classes at UCLA. The store was enormous. Even though I only ever bought pop and rock albums, the inventory was tremendous: everything from movie soundtracks to jazz to Top 40 to classical to world music. The staff wasn’t the friendliest bunch on the planet, but they certainly knew their music.

Favorite memory: Not knowing what else to do, I drove up to the Sunset Tower the day after John Lennon was killed. I guess I just needed to be with other people who loved John. His music was playing overhead and someone had pulled together an exhibit of his albums. Otherwise, it was business as usual--which in its own way was comforting. It was good to know the entire world hadn’t gone as crazy as I was feeling.

The film is fabulous--completely evocative of the period and the Tower Records experience. Still, Hanks hasn’t yet found a distributor and so is showing the doc at festivals and small venues, like the Grammy Museum. If you’ve ever bought anything at Tower Records—hell, if you listened music, any kind of music, during the 1960s, ‘70s or ‘80s—you must see this movie. 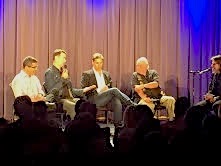 Colin Hanks (second from left) and
Russ Solomon (right)
Posted by Cyn at 6:24 AM