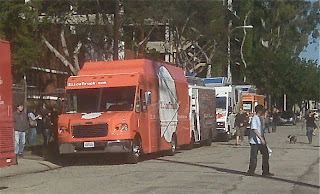 One of the hottest culinary crazes in Los Angeles right now is food trucks. Basically these are good old-fashioned “roach coaches,” except they serve gourmet food: fusion Mex-Asian tacos, barbecue, breakfast foods, desserts, etc. Since they park all over the city, customers track their whereabouts via Twitter and (sometimes) the Internet.

We don’t do Twitter, but we are all about good food, so Tim was thrilled when his favorite dining blog mentioned that some of the most popular catering trucks were holding a mini-benefit for Haiti on the westside today, 11AM-4PM! I was already committed to guest lecturing in a class at UCLA, but agreed to meet Tim at the event (halfway between home and campus) afterward.

At noon, I called and said I was on my way. Fifteen minutes later Tim called to say he had arrived but there was no parking. Though I was three blocks away, I parked in the first vacant spot I could find. I then got out and started walking toward the site. We found each other somewhere in the middle.

We winded our way through the crowds to see which dishes caught our fancy. I finally settled on Barbie’s Q and waited on line for 20 minutes before placing our order: a pulled pork sandwich for Tim and a “Q” sampler for me (3 small pork and chicken sandwiches). As the cashier handed me Tim’s sandwich, I heard the chef say they were now out of pork. The cashier asked if I could change my order.

“OK. The Q sampler with just three chicken sandwiches,” which the cashier then communicated to the chef.

Argh. I got my money back and shared Tim’s sandwich--one of the best pulled pork sandwiches I’ve ever had, by the way.

Still hungry, we went looking for more food. I bought a kabob salad to take home, while Tim stood on another long line for Vietnamese food. Meanwhile, I rushed over to Sweets Truck to grab some pastries I had eyeballed as we were surveying our options. My lips were smackin’ for a couple of cherry cupcakes in the window, when a person two people ahead of me snatched them up! Dejected, I announced it was time to go home as soon as Tim finished his pork banh mi.

I was walking back to the car when I spied a lone food truck, Dainty Cakes, turning the corner. Either they had already sold all their inventory and were heading home or were just arriving. I didn’t remember seeing them before--and believe me, I definitely would have remembered a truck selling cupcakes!--so decided to watch where they went. A young woman, who also spotted them, yelled out, “Dainty Cakes!” and told her friends she would tweet them her location as she starting running after the truck! I almost followed her, but at that point the truck turned right, so I decided to stay where I was in case it came back around. Sure enough, it circled the block and the young woman, who had also returned, and I ran over to where it was obviously going to park. We waved our arms, directing the driver to back-up and then move up six inches, etc., while planting our feet firmly on line (first and second places). The young woman's friends then joined us, laughing hysterically at these two crazy women so obsessed with eating cupcakes.

But we weren’t the only ones. By the time the gals in the truck were ready for our business, some forty people had lined up behind us. I ordered my three cupcakes--no cherry, so got lemon, coconut, and chocolate instead--and watched patiently as one of the gals applied my favorite frosting (cream cheese, please!) to each one. I then walked triumphantly back to the car with my booty while the rest of the hordes waited their turn. Tim and I devoured two of the cupcakes as soon as I got home. Damn good! 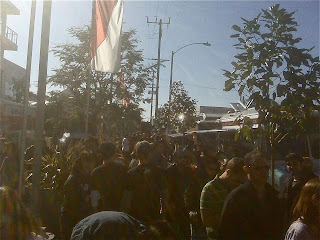 If I knew that I was going to something like this, I would not have been able to sleep the night before..this kinda street grub is very exciting to me. There were such things going on in Mexico City that I soon latched on to...I have only to close my eyes and picture the street markets of Tasco. I'm waiting very patiently in line for those sizzlin things.