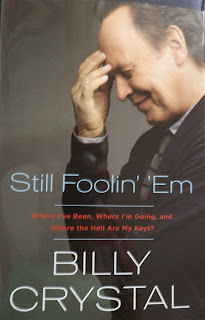 The Writer’s Bloc is our favorite non-profit literary organization. Although the venues regularly change, the format is always the same: a well-known author (often a celebrity) is interviewed by an equally well-known person (often another celebrity) much to the enjoyment of an eager audience willing to pay for the privilege of listening in. We’ve gone to countless Writer’s Bloc events, including, most recently, Judy Collins interviewed by Stephen Stills. On Thursday, one of our long-time favorite comics, David Steinberg, interviewed comedy legend Billy Crystal, whose new book, Still Foolin’ ‘Em, was released last week. The event took place at the Directors Guild theater in West Hollywood.

We arrived in time, despite the usual horrific rush-hour traffic. Still, the theater was pretty full by the time we got there, so we had to sit to the side. An older woman trolling for four seats asked us to save the one next to me, while she claimed the three empty seats in front of us. Her husband, who I soon learned was a lawyer named Herb, sat to my right. She and two friends sat one row up.

“He’s going to fall asleep immediately and snore,” she warned me. “Just give him a nudge!”

Herb laughed and said that nodding off during plays, movies, and even the opera was a hazard of turning 80 last March. Indeed, even though Tim and I weren’t exactly the youngest people in the audience, there were certainly few people younger than us there. I wondered if folks had actually come to see Steinberg, who is several years older than Crystal.

After a nice introduction, Steinberg and Crystal casually sauntered onto the stage and quickly started chatting. Obviously they’ve been friends for a long time. Crystal talked about his early career and about working on Saturday Night Live. He also did impressions of Howard Cosell (very funny), Muhammad Ali, Sammy Davis, Jr., and even George W. Bush. At Steinberg’s request, Crystal thrilled us with his “simply mahhhlevous” Fernando Lamas imitation. He also told hilarious stories about the Oscars show, which he has hosted nine times. Both Steinberg and Crystal then reminisced about appearing on The Tonight Show with Johnny Carson, whom they mentioned with great reverence. Getting a “thumbs-up” from Johnny was considered a major accomplishment in every young comedian’s career.

Through it all, Tim, Herb and I howled with laughter—no way was any of us going to fall asleep! If the book is even half as funny as Billy Crystal is in person, then it’s going to be an hysterical read.