From the Beatles to the Queen 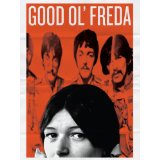 I hope you’ll forgive me if I breakout into a British accent while I’m writing!

On Saturday, I spent most of the afternoon at UCLA watching a special screening of The Audience, a play about Elizabeth II, starring Helen Mirren as (once again) the queen. Unlike the movie The Queen, for which Mirren won an Oscar for remarkably capturing the essence of the older Elizabeth, The Audience spans the queen’s entire reign, dramatically (and humorously) recreating weekly meetings with her various prime ministers. The plot moves back and forth through time, testing not only Mirren’s acting ability, but also her talent as a quick-change artist as she, via several costumes and wigs, transforms from seasoned old monarch into youthful novice and back again. It was an amazing performance and truly fascinating play. Let’s hope it comes to the U.S.
Then, yesterday, Tim and I schlepped up to the Sundance Cinemas on Sunset to see Good Ol’ Freda, a documentary about Freda Kelly, the Beatles’ former secretary. Despite being the envy of every Beatles fan in the world during the 1960s, Kelly has led a rather normal life since leaving “the lads” and, in fact, has never told her story before now. And what a wonderful story it is, too. Only 17 years old and a huge fan herself, Freda was plucked from a local typing pool, by Beatles manager Brian Epstein, to become the band’s fan-club secretary. Over the next 11 years, she became almost like a member of their families and, to this day, is fiercely loyal to their memory. Hers is a sweet and completely fresh perspective on a story I thought I knew these past 50 years. I dare you not to cry when, at the end (spoiler alert!), she looks back on all the Beatles people who are now gone. Every Beatles fan needs to see this film.
They should also, of course, see Produced By George Martin, which aired on local station KCET last week. As everyone knows, the now Sir George Martin was just as responsible for creating the Beatles’ sound as the Beatles were themselves. Although less emotional than Freda, the Martin documentary is no less fascinating and filled with stories I had never heard. I bought the DVD immediately.
Posted by Cyn at 6:23 PM